In which we discuss Tabby’s Star, the meaning of “up,” time dilation, and Christian scientists.

I wondered….Could the structures observed around the Tabby star that are postulated be the constructs of the new Jerusalem that is being constructed to come to Earth some day?

She is referring to the star, KIC 8462852, sometimes referred to as Tabby’s Star. This peculiar object captured people’s imaginations after scientists admitted they haven’t been able to explain irregular changes in the amount of light it’s emitting. Observations suggest a close formation of small objects is surrounding the star, blocking out some of its light. One idea is that these objects could be a swarm of comets (see artist’s impression below), while another idea is that they are some form of “alien superstructure.” (Neither idea turns out to be well supported by observational data.)

HD’s idea is novel and interesting, but I think it’s unlikely for the simple reason that Revelation 21 tells us God is going to scrap this universe and start over with a new creation.

And when Jesus says “I have not yet ascended to my Father” and speaks many many times of Heaven…then it is a for sure thing. We can count on it. It is real. It is there. And….it is up. (ascend) So as a scientist who studies space, can you tell me ….where is up?? If I am in Gulfport, I can point up. On the other side of the planet, someone else can point up. So where, scientifically….is up??

“Up” in terms of space and in terms of scripture are two different things. In space, “up” is more accurately described as “out,” as shown below. 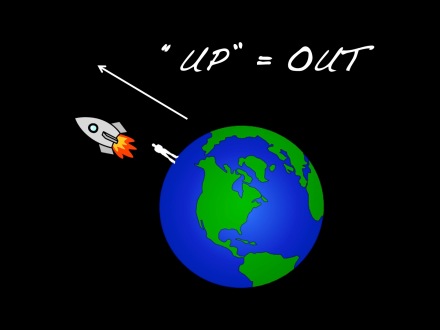 When Jesus talks about ascension, I don’t think He is going “up” (i.e. out) from the planet the way a rocket ship does, but rather He is transcending the universe similar to the way a three-dimensional creature would transcend a two-dimensional world. This animated sequence narrated by Carl Sagan illustrates the principle:

Then I saw a special on National Geographic about an experiment on distance and time. Using two atomic clocks, synchronized to perfection, one was left at the bottom of a tall mountain. One was taken to the very top. I think it was four days later the clock from the top of the mountain was brought down. There was a tiny, miniscule difference in time.   So, if 1,000 years are like a day to God (Scripture), how far out would you have to travel to have the 1,000 years equal to a day on Earth?

Gravitational time dilation results from differences in gravity. Despite the fact that it’s difficult for us to escape Earth’s gravity, it’s actually pretty weak, so there’s not much difference between the flow of time on the surface of the Earth and the flow of time out in deep space. It’s enough of a difference that engineers have to account for it, otherwise things like GPS wouldn’t work,  however, it’s not nearly enough to dilate time so that 1,000 years on Earth would be like a day for someone in deep space.

So, the question isn’t how far out you would have to travel in space to make 1,000 years equal a day, but how deeply into a gravitational field you’d have to go before time dilates that much. Turns out, it’s pretty deep, as in just a hair outside of the event horizon of a black hole.

It is amazing that more scientists haven’t become Christians.

There was a time when most scientists were Christian, particularly so in Newton’s time. It’s seems strange from our modern perspective, but in the 17th century, one had to be an ordained Anglican priest in order to hold a professorship at Cambridge. In the 17th century, American universities like Harvard and Princeton were religious institutions.

An entire thesis could be written on the subject, but suffice it to say, somewhere along the way Christianity not only ceased to be the dominant cultural force in the academic world, but academia became hostile to it. Still, the evidence for some kind of conscious creative force is there, and I suspect most scientists know it. English Nobel laureate physicist, George Thomson, observed, “Probably every physicist would believe in a creation if the Bible had not unfortunately said something about it many years ago and made it seem old-fashioned.” I think this is very much the case.

2 thoughts on “Fire Back: Where the Readers Respond”