My department will welcome a prestigious visitor this year: a person who received the Nobel Prize in physics in 2011. I looked back at the Nobel laureates for that year, and realized something remarkable — the physical sciences appreciate renegades.

Let’s face it, we’re all resistant to having our cherished ideas upended. But that’s what makes the physical sciences so remarkable — they are dynamic and willing to go where the data lead.

It was only a decade and a half ago that physicists believed the expansion of the universe might be slowing down. They tested that idea, and when evidence was found to the contrary, the physics community went where the data led. Physicists also had enough faith in their own laws and theories to largely accept the implication — an unknown force must be driving the accelerated expansion of the universe. A decade and half after overturning what seemed to be the obvious, the discoverers — Brian Schmidt, Adam Riess, and Saul Perlmutter — received the highest accolade possible in the physical sciences.

(It was only fifty years ago that many in the physics community believed the universe was eternal. Yet a relatively short time after the discovery by Penzias and Wilson of the “echo” of the big bang, physicists largely accepted the conclusion that the universe had a beginning in time. The big bang, once derided by some of the greatest minds in science, quickly became the prevailing paradigm for all of physics.)

In the 1980s, chemist Dan Schechtman made the startling discovery that atoms in solids could arrange themselves in a peculiar way not thought possible given the known laws of nature. He was criticized, ridiculed, and shunned by his colleagues. He persevered under these conditions, and within three decades experienced a complete reversal. He was the recipient of the greatest honor there is for a scientist when he received a Nobel Prize in chemistry in 2011. His discovery of quasicrystals, once derided by some of the greatest minds in science, led the International Union of Crystallography to change the definition of a crystal to incorporate Schechtman’s discovery.

Physics and chemistry are dynamic fields, willing to adopt new paradigms. There may be some initial resistance — which is actually necessary rigor — but they eventually go where the data and logic lead them. And the renegades are rewarded. I can think of few other fields of human study that are like that.

A new, superheavy element will likely be added to the pantheon of known elements. Created in a lab, and weighing in at 40% heavier than lead, element 117 is highly unstable and has a half-life of less than a second. Nevertheless, its fleeting existence in a lab will likely earn it a permanent place on the periodic table.

The periodic table contains both primordial (elements that have existed on Earth since the planet formed) and synthetic (manmade) elements. Element 117, also temporarily known as ununseptium, is a synthetic element. Despite its lesser atomic number, the announcement of element 117 follows that of element 118 (ununoctium), which was announced years before (and has a bit of a checkered past). Once these elements become approved members of the periodic table, they will be given proper elementy names by their discoverers.

Now, despite using the word “created” above, elements are not created, they are made, whether by nature or by man. We tend to use the term “created” rather loosely, but in terms of the biblical, the distinction between created and made is rather important. Created refers to the instantaneous act of bringing something into existence that did not exist before. Made refers to the process of fashioning something from pre-existing raw material, which takes time. Even the simplest element — primordial hydrogen, with just one proton and one electron — was fashioned over a period of time from pre-existing material. And elements 117 and 118, which took careful planning and execution in a lab, were effectively fashioned the same way.

Three American scientists have been awarded the Nobel Prize in physics for their discovery that the universe is expanding at an accelerating rate. Saul Perlmutter will share the prize with Brian Schmidt and Adam Riess.

The discovery of the accelerating expansion of the universe followed an unexpected observational discovery in 1998. Astronomers in two different groups — the Supernova Cosmology Project (Perlmutter) and the High-z Supernova Search Team (Schmidt and Riess) — were observing the characteristic light signature of a certain type of supernova, called a Type 1a supernova, to probe the expansion history of the universe.

Let’s pause the story for a moment to explore the significance of these objects. Type 1a supernovae are a special subclass of exploding stars. Other types of supernovae occur when a massive star runs out of fuel, causing the core to collapse; their intrinsic brightness depends on a variety of factors, including the mass of the progenitor star. Type 1a supernovae occur when a white dwarf — the exposed core of a dead less-massive star — reaches a mass limit, called the Chandrasekhar limit. The mass limit can be reached if a white dwarf siphons matter from a companion star (see the header image above) or if two white dwarfs in a binary system collide. Since the resulting explosion always occurs at roughly the same mass, these supernovae always have roughly the same intrinsic brightness. This predictable brightness makes Type 1a supernovae excellent probes of distance and cosmic history.

Back to our story. The astronomers were using Type 1a supernovae to test the idea that the universe was slowing down in its expansion. If their idea was right, then the supernovae would appear to be brighter than expected, meaning they would be closer to the Earth than they would be if the universe had been expanding at a uniform rate. But they found the opposite: the supernovae appeared significantly dimmer than expected, meaning these exploding stars were further away than they would be for a uniform expansion. The astronomers concluded that the expansion of the universe was not slowing down, but rather speeding up. This conclusion was further supported by discoveries from other cosmological experiments, including mapping of the cosmic microwave background.

These discoveries led to the hypothesis that a mysterious force, called dark energy, is driving the accelerated expansion. Very little is currently known about this force, but several experiments, including HETDEX, Destiny, and SNAP, are underway to hopefully shed some light (as it were) on the subject. 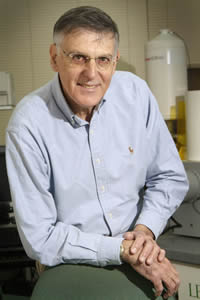 Israeli scientist, Dan Schechtman, has been awarded the Nobel Prize in chemistry for his discovery of quasicrystals. What makes this award particularly interesting is the degree to which Schechtman persisted to make his discovery known. He worked for years in the face of skepticism and ridicule — two-time Nobel laureate, Linus Pauling, evidently referred to Schechtman as a “quasi-scientist” — before he managed to convince the scientific community that his observations overturned the prevailing model for how atoms and molecules can be arranged in solids.

A crystal is a type of material in which the arrangement of atoms is ordered and periodic. Scientists have probed crystalline structures using electron diffraction experiments in which beams of electrons are passed through crystal layers, producing an interference pattern. When Schechtman performed similar experiments on a different type of material, he found a peculiar interference pattern that seemed to defy the known laws of nature, since it indicated an ordered but non-periodic pattern in the arrangement of atoms. This is similar to the mosaic tile patterns found in medieval Islamic shrines.

Since Schechtman’s discovery, many quasicrystals have been synthesized and studied, and a naturally-occurring quasicrystal was discovered in Russia in 2009. Quasicrystals possess some useful properties, including a non-stick surface, low heat conduction, and hardness, that make them useful material for many products, from frying pans to surgical instruments.

In spite of his vindication and receiving the highest of accolades, Schechtman remains endearingly modest:

“The main lesson that I have learned over time is that a good scientist is a humble and listening scientist and not one that is sure 100 percent in what he read in the textbooks.”