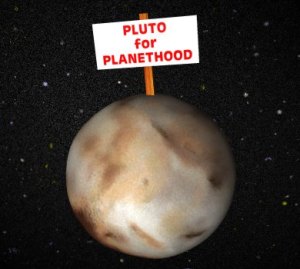 In a surprising reversal this week, members of the International Astronomical Union voted to reinstate Pluto’s status as a planet. This overturns the IAU’s 2006 decision to reclassify Pluto as a ‘dwarf planet’ following the adoption of an official definition of what constitutes a planet, which excluded Pluto.

Speaking on behalf of the IAU, one member is quoted as saying, “People were surprisingly passionate about Pluto’s status. The pressure from the general public to re-admit it to the ‘planet club’ was so great, we just couldn’t ignore it. Welcome back, Pluto.”

18 thoughts on “Pluto is a planet once again”