I had the chance to speak with Oxford mathematician, John Lennox, while he was visiting Austin a couple of weeks ago, and as an experienced Christian apologist, he offered me some very good advice. One piece of advice that surprised me, however, was that I should limit my use of the word “faith” in conjunction with science.

The problem is, while we Christians understand what is meant by the word “faith,” atheists don’t. The word has been co-opted and corrupted to mean “blind faith,” as in “believing without reason or evidence” or “believing in spite of evidence to the contrary.” Here’s a typical example (sent to me by an atheist on Twitter): 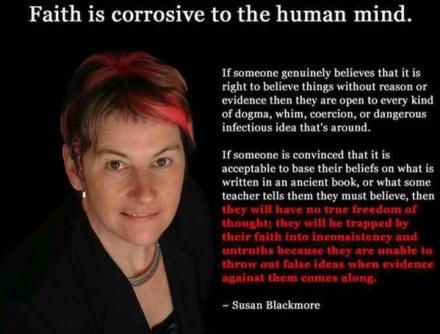 Christians and atheists use the same words, but it should be evident we’re speaking different languages. For the atheist, faith is the act of surrendering your intellect. However, C. S. Lewis probably put it best when he explained that faith is, in fact, the opposite of that: it is the act of holding onto a belief you once accepted through reason in spite of your transitory emotions.

There is a wonderful example of faith in Carl Sagan’s novel, Contact, which did not make it to the film adaptation. In it, Dr. Arroway, who understands and believes in the laws of physics, is admiring an enormous Foucault pendulum. Her friend, the not-quite-priest, Palmer Joss, asks her if she’s willing to test her faith in the laws of physics by placing herself just a little beyond where the pendulum is predicted to stop in its upward swing. (See the video below.) Admirably, she does so, but admits to having her faith shaken a bit as the several-hundred-pound weight at the end of the pendulum was swinging towards her face. This is precisely what Lewis meant by having faith–holding on to a reasonable belief in spite of your emotions.

There is another, slightly different, sense in which Christians use the word “faith,” which doesn’t have anything to do with emotions. It means to accept something as likely to be true in spite of your inability to prove it. Christian philosophers, William Lane Craig and Alvin Plantinga, point out ways in which we take things on faith, probably without even realizing it. For instance, most of us take it on faith that there is a past. Does that sound ludicrous to you? Well, try proving that the universe didn’t just pop into existence five minutes ago, complete with fake memories of everything that we think happened in the past. You can’t prove it didn’t happen. Try proving that you aren’t in the Matrix and being manipulated to think you’re experiencing things that you really aren’t. You can’t. Yet you very likely go through your daily life taking it on faith that reality is reality and that you are in fact experiencing these things and that your memories are real, because that is a reasonable thing to do.

Atheists engage in faith every bit as much as Christians, but the ones who object to “faith” are either too blind to realize they engage in it, or they pick and choose what sort of faith is acceptable and what is not.

Faith is not a bad word. Unfortunately, Lennox is right, and you won’t get very far with non-Christians if you insist on sticking to the strict definitions of words that carry emotional baggage. By all means, correct atheists who accuse you of having faith as though it’s a bad thing, but when trying to convince them that Christian beliefs are reasonable and not at all incompatible with, say, modern science, you will have to use other words. For all their talk of reason, most atheists are no different than most people in general, and are far more readily convinced by rhetoric than by dialectic. In other words, they are more easily moved by clever appeals to emotion than by strictly logical arguments.

6 thoughts on “For the rational person, is faith a bad word?”