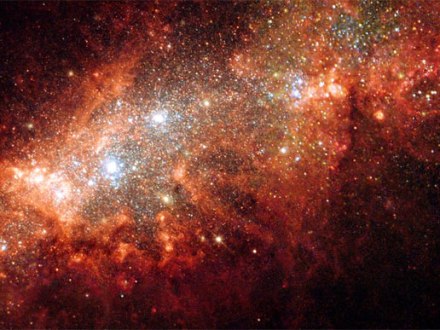 If a flea paused in his epic journey through
the weave of the homespun trews of an ale-sodden
Hebrides husbandman, and bent its thoughts on the
grand design of the cloth, striving to grasp not just
the mechanics of the warp and weft of the loom,
but the overarching vision of the weaver, would
you be surprised?

If a single note in a symphony, battered and whirled
by woodwinds and violins, paused for a heartbeat
to consider and assemble a vision, not just of
the entire piece of music, but the conductor and
composer behind the oeuvre, would that raise an
eyebrow?

Yet, astronomers, the carbon of their cellular
structures the product of some helpless exploding star
aeons ago, look out upon the entire cosmos, and ponder:
niggling away at countless points of light, in
search of a reason for every detail of its component
weave of light and sound; every aspect of its overall
structure bent by their basilisk gaze. All the while,
swept along willy-nilly on a tiny dust-mote planet,
scorched by an incandescent sun, gnawing on other
carbon life-forms for their sustenance, and quenching
their thirst with dihydrogen monoxide and knowledge
(and maybe beer as well).

The cosmos, looking down on this, can only gasp in
amazement at the unmitigated intrepidity, the
sheer audacity, of these tiny beings and their
grandiose goals and dreams. And that courage, that
vision, in a nutshell, is astronomy.