Here is your weekly reminder of Psalm 19 — colliding galaxies, Arp 274. 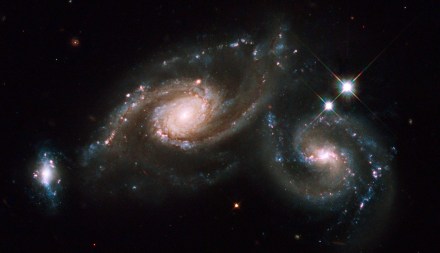 Galaxy collisions are a testament to the strange way in which space is scaled. The universe is a relatively crowded place on the galactic scale, which is why these collisions are fairly common. But when galaxies crash into each other, the stars in them are so far apart from each other that the stars themselves usually don’t collide.

Think of it this way. If you were to draw a 1 cm dot that represented the Sun, the nearest star to the Sun (Alpha Centauri, ~4 light-years away) would be a slightly larger dot about 400 km away. That’s how much space there is between the stars.

Now, if you were to draw a 1 cm dot that represented the Milky Way Galaxy, the nearest galaxy to ours (Andromeda, ~2.5 million light-years away) would only be 25 cm away.

That’s why galaxies often collide, but stars usually don’t. However, the gas and dust that is inside galaxies does collide, and this leads to a brief period of intense star formation as the galaxies gravitationally tear each other apart. Once this violent dance settles down, a newly formed galaxy remains.

Galaxy collisions take hundreds of millions of years to play out, so what we’re seeing with images like the one above are cosmic snapshots of collisions. Astrophysicists use supercomputer simulations to hugely speed up the process and explore what a full collision would look like.