Here is your weekly reminder of Psalm 19 — Saturn’s moon, Enceladus. 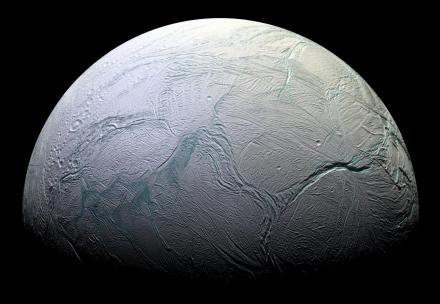 Enceladus is the sixth-largest of Saturn’s 62 moons. At 500 km diameter, it is dwarfed by Saturn’s largest moon, Titan (5,100 km) and Earth’s Moon (3,500 km). It was discovered in the late 18th century by the German-English astronomer, William Herschel, whose son, John, named it. Not much was known about Enceladus until the Voyager missions studied the moon in the 1980s. The Cassini mission followed in 2005 to study Saturn and its moons in greater detail. The above image was taken during this latest mission.

The surface of Enceladus is comprised of clean ice (as opposed to “dirty” ice, which contains rock, dust, and organic compounds) that reflects most of the sunlight that reaches it. Enceladus has an active surface, with over 100 geysers spewing water vapor into the rings of Saturn. Last year, Cassini found evidence of a subsurface ocean beneath the icy surface. The Cassini spacecraft is scheduled to fly through one of Enceladus’ geyser plumes in the hope that it will reveal the chemical makeup of its liquid ocean.