Here is your weekly reminder of Psalm 19 — the planet Jupiter.

Anyone who has looked up at the night sky is acquainted with Jupiter. It’s the third-brightest object in our sky after the Sun and Venus. It’s also the largest planet in our solar system, a gaseous giant comprised almost entirely of hydrogen and helium. Interestingly, its size, in terms of orders of magnitude, places it exactly in the middle between the Earth and the Sun — it is almost exactly 10 times smaller than our Sun, but just over 10 times larger than the Earth. 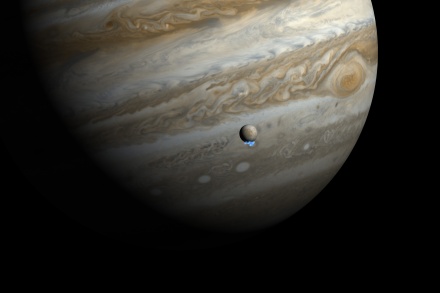 Some call Jupiter a failed star, but that’s an exaggeration. The defining characteristic of a star is that nuclear fusion is occurring in its core; however, Jupiter would need about 80 times more mass for this to occur, so it falls well short of the star limit. Still, it’s pretty massive as planets go, outweighing all of the other planets in our solar system combined by more than a factor of two.

Jupiter is a visual treat for the astronomer for a number of reasons: its colorful bands of clouds, its Galilean moons, and its Great Red Spot. The bands represent regions of rising and descending clouds. The Galilean moons — Callisto, Europa, Ganymede, and Io — were discovered by (you guessed it) Galileo in the 17th century, and are visible through even small amateur telescopes. The Great Red Spot is a turbulent storm that has been raging on Jupiter for hundreds of years. To give you some perspective on size, consider that two Earths could fit inside the Great Red Spot. 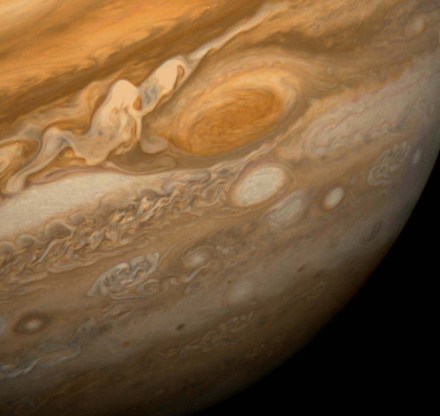 The Great Red Spot as seen from Voyager 1. Credit: NASA.