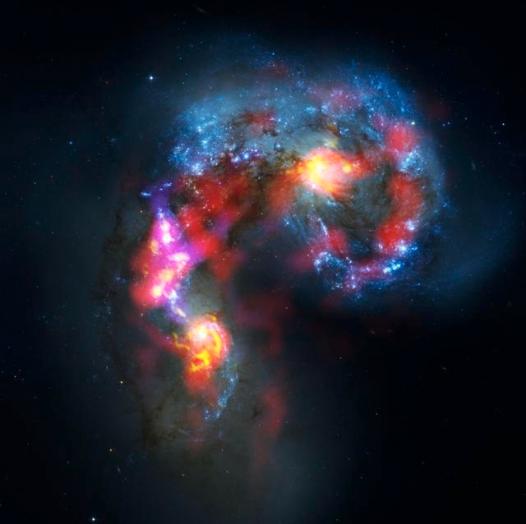 This wow-inducing image was just released by astronomers at the Atacama Large Millimeter/Submillimeter Array, or ALMA, which has finally opened its eyes to the stunning long-wavelength sky. The image, a combination of submillimeter ALMA imaging and optical imaging from the Hubble Space Telescope, shows the stunning Antennae Galaxies — two spiral galaxies in the process of colliding.

The “millimeter/submillimeter” refers to the range of wavelengths of light to which the ALMA instruments are sensitive. Millimeter and submillimeter wavelengths are much longer than the optical wavelengths our eyes detect, and thus can’t be seen by our eyes; but they can be “seen” by ALMA’s instruments, and translated into understandable data, like the image above. Astronomers are keen to observe the sky at these wavelengths, because some important astronomical processes produce light only at these wavelengths, including the births of stars and planets and the fiery birth of our universe.

ALMA is situated at an altitude of more than 16,000 feet on the Chajnantor plain in Chile’s Atacama Desert, the driest desert in the world. This may seem like a strangely inconvenient location for an observatory, but for observational astronomy you want high and dry. This reduces attenuation (dimming) of astronomical light and absorption by molecules in Earth’s atmosphere — mainly CO2, oxygen, and water.

ALMA is currently only partially operational, and not due to be complete until 2013. Once complete, it will have at least 66 radio antennae. Long-wavelength astronomy (this includes radio wavelengths) frequently makes use of arrays, because this is a relatively easy and cost-effective way to simulate a single gigantic antenna. These antennae, or radio dishes, are arranged in a configuration that can be moved in and out to create baselines of different length, essentially allowing the simulated gigantic antenna to change its size. 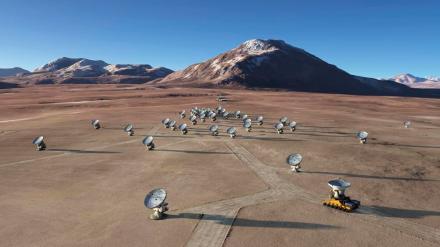 When the baseline of the array is small (~160 m), this allows greater sensitivity for extended sources, such as the Antennae Galaxies shown above. When the baseline is large (16 km), it produces exquisitely fine detail. The length of an array’s baseline typically cycles over a period of several months, as it’s quite a job to move the telescopes in and out.

If any of this seems familiar, it may be that you’ve seen a similar facility in the movie Contact. Some of the movie’s scenes were filmed in the fall of 1996 at the Very Large Array (VLA; soon to be the Extended Very Large Array) near Socorro, New Mexico. The VLA is a sibling of ALMA, whose parent organization is the Virginia-based National Radio Astronomy Observatory.