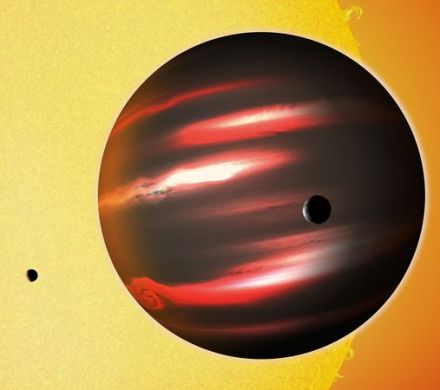 Astronomers have observed what they believe to be an exceptionally dark planet orbiting a star 750 light-years from Earth. The planet, called TrES-2b, is apparently so dark that it reflects only 1% of the light that reaches it from its parent star. By comparison, the Earth reflects about 30% of the light that reaches it from the Sun. The reflectivity of TrES-2b is so low that it would be outshone by charcoal (reflectivity of 4%).

The new exoplanet was discovered with the Kepler spacecraft, which looks for stars that exhibit periodic dips in the amount of light they shine. These periodic dips are interpreted as the signal of a planet passing in front of its parent star as it orbits. Once Kepler detects such a star, astronomers observe it in greater detail and use the data they collect to calculate properties of the exoplanet candidate, such as mass, radius, orbital distance, surface temperature, and reflectivity.

The data obtained for TrES-2b indicate that it is a “hot Jupiter,” a planet with a mass similar to or greater than Jupiter that orbits very close to its parent star — about 0.02 – 0.5 astronomical units (AU). The orbital distance for TrES-2b is 0.04 AU, far closer to its parent star than Mercury is to the Sun at 0.39 AU. (The Earth orbits the Sun at an average distance of 1 AU, which is about ~150,000,000 km). The close proximity of TrES-2b means its surface temperature is quite high, about 1,000 degrees Celsius, the same as Mercury’s peak temperature on the side facing the Sun.

According to theoretical models of planet formation, a gas giant could not form so close to its parent star, thus astronomers believe that these hot Jupiters form further out in their systems and migrate in over time. Theoretical models that describe the formation of this type of planet predict that they should reflect at least 10% of the light that comes from their parent star, about the same reflectivity as the planet Mercury. The exceptional darkness of TrES-2b has astronomers wondering if their models need to be rethought.

As for what type of substance could cause TrES-2b to be so inky black, astronomers are not sure, but speculate that it could be something exotic.

“Some have proposed that this darkness may be caused by a huge abundance of gaseous sodium and titanium oxide,” [lead astronomer David] Kipping said. “But more likely there is something exotic there that we have not thought of before.

“It’s this mystery that I find so exciting about this discovery.”