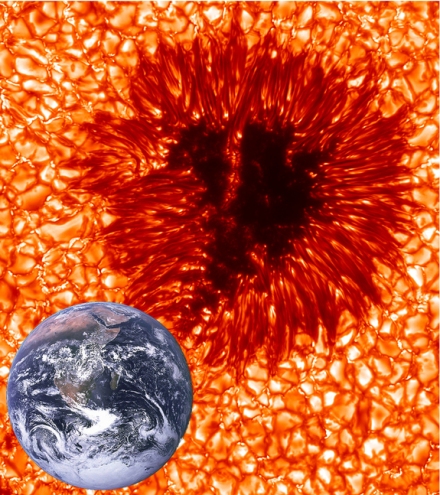 A colorized photo of a sunspot with the Earth shown for scale.

New results from three different studies indicate the Sun is likely entering a prolonged period of low activity, which will have a profound effect on the Earth. Solar scientists base their conclusion on weakening magnetic fields along the poles of the Sun and decreasing intensity of sunspots.

“The solar cycle may be going into a hiatus,” Frank Hill, associate director of the National Solar Observatory’s Solar Synoptic Network, said in a news briefing [June 14].

The studies looked at a missing jet stream in the solar interior, fading sunspots on the sun’s visible surface, and changes in the corona and near the poles.

“This is highly unusual and unexpected,” Hill said. “But the fact that three completely different views of the sun point in the same direction is a powerful indicator that the sunspot cycle may be going into hibernation.”

Since the 1800s, scientists have known that the Sun goes through a cycle in which the number of sunspots visible on the Sun’s surface gradually rises to a maximum and then falls to a minimum, repeating approximately every 11 years. Sunspots are dark patches on the surface of the Sun about the size of the Earth. They appear dark in photos of the Sun, because the plasma in sunspots is relatively cool (~4,500 K) compared with the plasma elsewhere on the surface of the Sun (~5,800 K). The key word is relatively — if you were so unwise as to point your telescope directly at a sunspot, you would still be blinded. 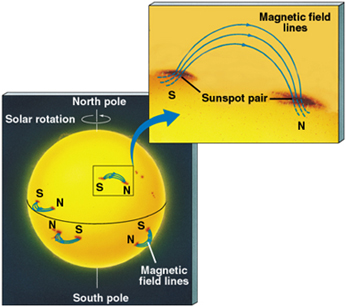 During the solar maximum, when the number of visible sunspots reaches a peak, the Sun’s magnetic field actually flip-flops. If you think of the Sun as sort of like a gigantic bar magnet, this means the south magnetic pole becomes the north magnetic pole, and vice versa. The Sun thus has a solar cycle that lasts about 22 years, since this is how long it takes for the Sun’s magnetic field to return to its previous polarity.

Solar scientists believe that the current maximum may be the last we’ll see for decades, and this has profound implications for the Earth’s climate. The sunspot cycle repeats fairly regularly, but the intensity of the sunspot cycle can change dramatically. In the late 1950s there was a particularly strong solar maximum, and in the period 1645 to 1715 there was virtually no sunspot activity at all. The latter period is referred to as the Maunder minimum (after the astronomer who discovered it in observational records1). The significance of the Maunder minimum is that it coincided with a prolonged period of exceptionally cold weather in Europe and North America, referred to as the Little Ice Age. This is part of a general trend of colder periods coinciding with solar minima. If we are entering another prolonged period devoid of solar maxima, it is likely we will experience a prolonged period of cooler weather.

[1] E. W. Maunder wrote a book called The Astronomy of the Bible, which appears to be a serious discussion of scriptural references to astronomy. It is available for free at Project Gutenberg. (I’m adding it to my already long list of must-read books.)

3 thoughts on “Sunspot hiatus may mean colder weather ahead”