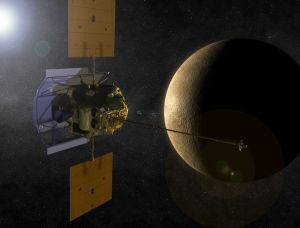 For the first time ever, we have a probe orbiting the planet Mercury. The MESSENGER probe was successfully maneuvered into orbit around Mercury yesterday following a six-and-a-half-year series of gravitational flybys past Earth, Venus, and Mercury, to nudge it into course. Starting in April, MESSENGER will make two orbits of Mercury per (Earth) day, collecting information to send back to scientists on Earth.

Previous missions to Mercury include the Mariner 10 spacecraft, which gathered data as it quickly flew past Mercury three times in 1974-1975, and three data-collecting flybys of Mercury by the MESSENGER probe in 2008-2009.

NASA scientists hope the mission will help answer several questions about Mercury, including why the tiny planet is so dense, what its geological history is, and whether there is actually ice at its poles.

7 thoughts on “MESSENGER probe locks into orbit around Mercury”