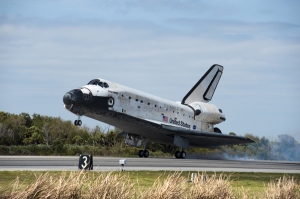 Space Shuttle Discovery made its final landing yesterday. Astronaut Michael Barratt noted it was “about time” for the shuttle to retire, but at the same time he and the rest of the crew expressed sadness at the occasion:

“This is a pretty bittersweet moment for all of us,” [Commander] Lindsey said on the runway. “As the minutes pass, I’m getting sadder and sadder about this being the last flight. And I know all the folks involved in the shuttle program feel the same way.”

A lot of that feeling comes from the knowledge that there is no new spacecraft to replace the aging fleet of shuttles.

Space Shuttle Endeavour is scheduled to make its final journey into the great beyond in April, followed by Atlantis in June.

5 thoughts on “A final welcome home for Discovery”